Web design is an art and there are a lot of strategies that can come into what a website should look like and do. This article is going to talk about how web design should be really close to billboard design. When designing a billboard you have to remember that your viewers are going 60, 70. 80, or even 90 miles an hour. The most important thing for a billboard to do is GRAB ATTENTION FAST. If there is a billboard that is cluttered with words and numbers it nearly ineffective.

What kind of music do they do? This is a classic example of way to much going on. What do they really want us to take away from looking at their billboard?

Who is sponsoring this? If they wanted to make this so we did not know who was putting up the billboard they did a good job. If you don’t care about having your logo so people can see it, then why put it up? 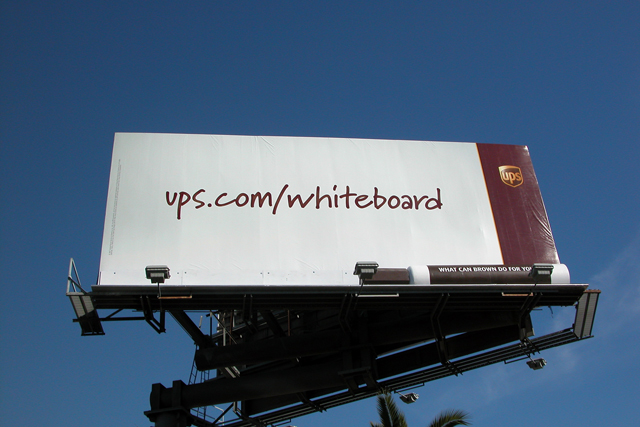 Who was the company sponsoring the billboard? What do they want you to do? Simple answers: UPS and go to website.

In billboard design the standard rule is that you have 3 seconds to grab someone’s attention. In web design that number has been a standard 8 seconds, however website users are becoming even less patient and I would say that number would be down to 5 seconds. Website users are the same people that go driving past a billboard at 60 miles an hour, and they treat your website in the same type of manner. Scanning to see what it offers and what they should do. In web design I would say “Less Is More” would be a good philosophy to follow. Having clear titles, clear navigation, simple to read text and easy to decipher pictures will make your website much easier to use when someone is going to only take 5 seconds to see what they should do. Should I stay here, what do they have, if I stay where should I go, what should I click first and more questions like these are questions that happen in a users mind very quickly. I guess you could say that your users are going to be going an average of 50 miles/hour when they come to your website. Make it simple for them to go “Got It”.

Perhaps the biggest internet company in the world has one of the easiest to use websites, Google.com, so should yours be more complicated then theirs.